The Dungeons and Dragons, 5th Edition Monster Manual was released from Wizards of the Coast a while ago. As mentioned in previous reviews, I have delved into the newest edition of Dungeons and Dragons with the goal of teaching my growing boys the playing style they are more likely to encounter out in their circles when they reach a gaming age. And thus, here I am, a chronic first edition player reviewing this D and D’s newest version.

Publisher: Wizards of the Coast

Overall the newest Monster Manual is a feast for the eyes. Color and art on every page. I suppose I would have lost my mind if I could have seen something like this in 1979. It is vast and well detailed. They simplify many more standard beasts and animals and also provide a smattering of pre-made characters such as Archmage, Priest, and Spy, which can also be useful for fast tracking someone you might need suddenly during game play or save you time while setting up a scenario. So the overall monster count is huge. 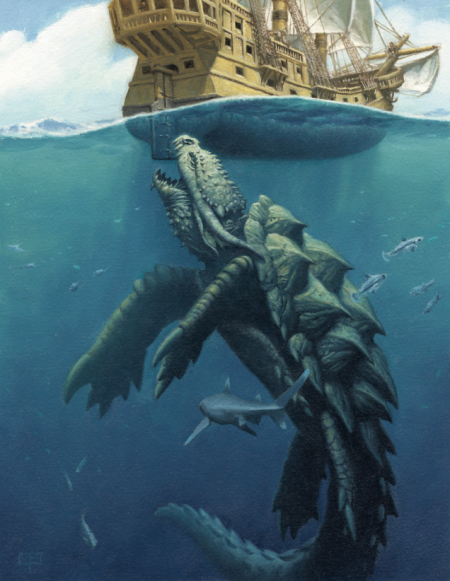 This version tries to keep the monsters tighter. This has the advantage of making them easier to run without being confused, but also tends to make the creatures identical over the different gaming tables across the globe. They combat this by making many more subgenres and different types even within the same species. It has such a huge sweep, however, it would be hard to not be inspired to create a world in your own style.

The book also defines monsters much more than the original Monster Manual did. Backgrounds are provided and where they fit in the world is often discussed. Things like which demon lord created a creature is revealed.

Things I didn’t like were how low some of the armor classes were. I understand they are creating their own game balance, but it seems like they increased the hit points while making everything easier to hit, as though players couldn’t handle not being able to hit and might get sad. Also, I always enjoyed the odd spells creatures like Devils, Demons, and Slaadi possessed. These abilities were toned way down. They also lost the magic resistance stat. I found these made the outer planes creatures more dangerous and interesting. Instead they are more like huge monster hit point bags.

This being said, it is a fun book, and yes, I know we all resist change, but the manual does not make it too hard. It is a fantastic effort and gives the Dungeon Master all sorts of creative ideas. Yeah, I think this will work for most of us.

Grab a little of my fiction here